As part of a Royal Holloway college wide series of events to commemorate suffrage at Royal Holloway in 2018, the Bedford Centre for the History of Women has teamed up with Winchester’s Centre for the History of Women’s Education and the Historical Association to organise this international, interdisciplinary conference exploring the links between education and suffrage campaigns and the roles of college women in them.  The conference is bringing together researchers, school teachers, archivists, curators and students to discuss how suffrage can be taught online, and in schools, HE and heritage institutions today through individual presentations, panels, workshops, posters and exhibitions. The Bedford Centre and Royal Holloway Archives will also launch their digital Royal Holloway and Bedford College Women and Suffrage resource, and commemorate the funeral of RHUL alumna Emily Wilding Davison.

There is still time to submit brief proposals for the Historical Association’s strand for Teachers and we particularly welcome submissions relating to African-American Women’s contribution to suffrage campaigns.

We are delighted to announce our keynote speakers who will illuminate a range of methods and national, international and transnational approaches to the theme of education and suffrage.

Elizabeth Crawford, renowned suffrage researcher, writer and book- dealer https://womanandhersphere.com/  will be talking about the links between education and suffrage in relation to the Garrett sisters and Emily Davies.

Eric Pumroy, Director of Special Collections & the Albert M. Greenfield Digital Centre for the History Of Women’s Education (Bryn Mawr, USA) and former Director Jennifer Redmond, (Maynooth University, Ireland) who will speak about education, suffrage and their work on the Seven Sisters’ College Women: Documenting the History of Women in Higher Education portal.

Kay Whitehead, Professor of Education, (Flinders University, Australia) who will give a presentation on transnational teacher education and suffrage in Australia and Britain.

However, despite Emily receiving a two-year bursary of 30 pounds, she left Royal Holloway before the end of her course due to the death of her father and lack of funds to complete her course. She worked as a governess in order to fund the completion of her degree which she later finished at St Hugh’s Hall, Oxford.

Emily joined the Women’s Social and Political Union in 1906 and carried out itinerant work for the WSPU and administrative tasks in the WSPU’s Information Department.[1] Emily embraced a range of militant activities and initiated new forms of militancy such as pillar-box firing. She was imprisoned on numerous occasions during her time as a WSPU member, engaging in hunger-striking and experiencing the horrors of force feeding. She was so enraged by the torturous process of force feeding that, on two occasions, she threw herself over the landing railings in Holloway prison in order to draw attention to the inhumane process.

Emily Wilding Davison’s defining militant act, however, occurred on the 4th June 1913 when Emily attended the Epsom Derby. With the intent of stopping the King’s horse, Emily, armed with a WSPU flag around her body, walked under the railing near Tattenham corner and attempted to grab the reins of the King’s horse, Amner. The horse ran straight into Emily, knocking her to the floor. Emily was taken to Epsom Cottage Hospital after the incident, where she died just four days later from her injuries.[2] 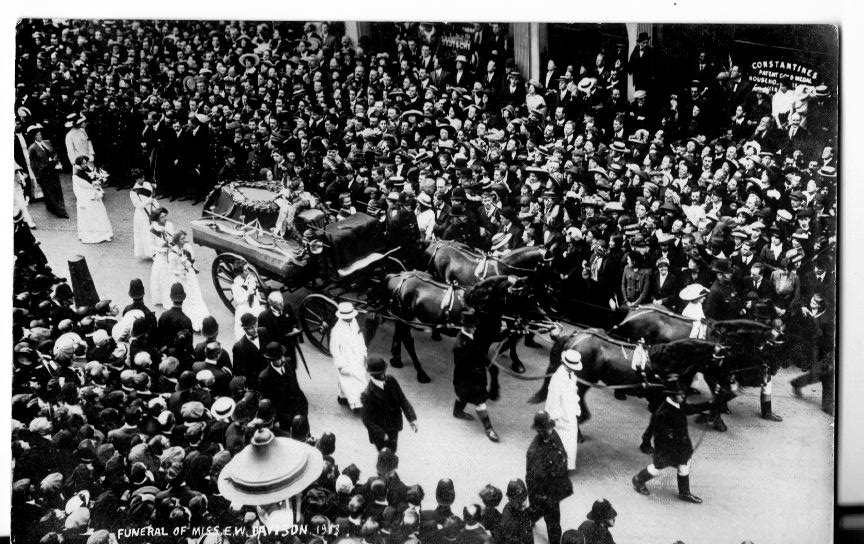 In a tribute to Emily, published in The Suffragette, Rose wrote:

‘As I stood with Mary Leigh by the bedside of our dying comrade and my old college friend, it seemed as though there was nothing which was hers left to give that she had not freely given to the women’s movement…She had felt the call, she knew that suffering and outraged womanhood looked to her, as indeed to all of us, to do her utmost to release her from bondage. No penalty, no pain, not loss of life itself could hold her back from responding to that call…She had given her life for us and for all humanity- counting but not fearing the cost.’ [3]